The Story of Frankie Potts

View source
watch 02:40
World of Warcraft: Dragonflight - The Loop
Do you like this video?
Play Sound

The Story of Frankie Potts

The Story of Frankie Potts was a teaser site for the game Mafia II.

Starting today, you can register to be a part of "The Story of Frankie Potts" - an interactive experience that brings you into the world of an undercover FBI agent learning the inner workings of the three Mafia families in Empire Bay. Over the course of Frankie's operation, players will gain access to exclusive screenshots, in-game info, and character histories.

Establishing himself as Francesco Potenza, alias Frankie Potts, the undercover agent sets himself up in a high-rise headquarters equipped with a darkroom. Through informants and surveillance, Frankie becomes aware of low-level players like Derek Pappalardo, a corrupt union boss, Harry, a weapons dealer, and Giuseppe, who runs a general store with mob connections.

At Freddy's Bar, Frankie meets low-level crooks who work for an auto theft ring. After Frankie earns their trust, they take him inside Giuseppe's General Store. The store turns out to be a false front for a literal black market packed with fake IDs, illegal weapons and tools for safe cracking. Frankie's new friends introduce him to Charlie, whose service station is really a chop shop, and Mike Bruski, whose scrap yard gets rid of the evidence.

Frankie is enlisted to help steal a car for a family-connected mobster, "legitimate businessman" Henry Tomasino. 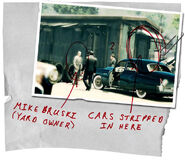 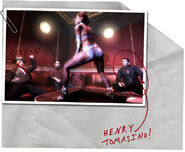 Using government-supplied contraband, Frankie plies more information out of bartender Johnny Morgan at Freddy's Bar. He learns that mobster Henry Tomasino is tied to Alberto Clemente, the head of a paranoid and mean-spirited crime family.'

To earn Tomasino's respect, Frankie assists in stealing and stripping a luxury car belonging to Carlo Falcone, the head of a rival family. At the Empire Arms Hotel, the very pleased Tomasino introduces Frankie to other members of the Clemente Crime Family including the treacherous Luca "Rat Soap" Gurino, an unpleasant and ambitious crime boss. 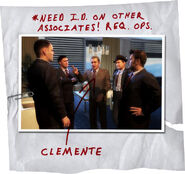 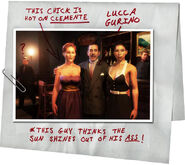 Accepted as a foot-soldier in the Clemente family, Frankie Potts soon ends up in way over his head. At Clemente's meat processing plant, he witnesses the brutal torture of Silvio Palmieri. Before murdering Silvio, the paranoid Clemente accuses him of being a spy for a rival gang.

The deeply shaken Frankie learns that Clemente has a reputation for violent outbursts. Some of Clemente's own associates eagerly await the day he pushes another Mafia family too far.

In the wake of Silvio's murder, the highly stressed Frankie becomes increasingly erratic. Through the gossip of low-level mobsters, Frankie learns that Silvio was related by marriage to Eddie Scarpa, the aggressive, emotional capo régime of the rival Falcone family. Frankie insinuates himself into the scene at the Maltese Falcon, a restaurant owned by family boss (and Humphrey Bogart lookalike) Carlo Falcone.

Eddie believes that Clemente was responsible for killing his cousin's husband, Silvio - but he needs proof. Frankie hints that the evidence may have been locked in Clemente's safe by the devious Luca Gurino. Promising him a new future in the Falcone organization, Eddie tells Frankie to get his hands on the mysterious evidence by any means necessary. 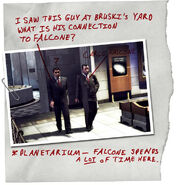 At F.B.I. headquarters, Frankie's increasingly unreliable behavior begins to worry the bosses. Despite Frankie's success in mapping the structure of organized crime in Empire Bay, his unauthorized investigation is on very thin ice.

Frankie, however, is too absorbed in his latest task to care. Under the tutelage of aging black market maven Giuseppe, he's learning the art of safecracking.

When he successfully cracks Clemente's safe, Frankie discovers a bloodstained wallet belonging to the recently deceased Silvio. With hard evidence of the murder, Frankie knows he's found a sure path into the Falcone organization. He passes on the evidence to the enraged Eddie Scarpa, who vows revenge on the Clemente family.

Frankie also discovers another surprise in the safe: contraband suggesting that Clemente is dabbling in illegal trade with one of Empire Bay's street gangs. Police raid one of the street gang's strongholds, possibly due to a tip from Eddie Scarpa. 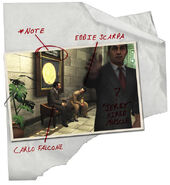 At the Cathouse, Frankie overhears gossip about a building feud between Empire Bay's three major families. Clemente knows that someone stole his contraband - but he doesn't blame the Falcone organization. Instead, he suspects his old rival, the aging Don Franco "Frank" Vinci, a staunch traditionalist who disapproves of Clemente's activities.

In recent years, Vinci's organization has declined as the aging Don takes more interest in his racehorses than in his criminal enterprises. Falcone's organization considers bucking Vinci's leadership in order to cash in on the illegal trade that Vinci frowns upon.

Frankie receives bad news from his handlers at the Bureau: his whole operation has been officially cut off from all authorization. Freed from official scrutiny, his only mission is to create chaos among the gangs.

On his own initiative, Frankie heads into the area controlled by the Bombers, a black street gang. He befriends Eric, a beatnik lowlife, who helps him establish contacts on the street.

Intrigued by Frankie's new street connections, Eddie Scarpa devises a plan. Falcone family accountant Harvey is a master counterfeiter. Under Eddie's orders, Frankie aids Harvey in printing a stack of fresh "cash" which they use to make an illegal deal with the Bombers. With the bogus money's serial numbers, the Falcone family is able to track down the suppliers. The trail of cash leads to a local gang called the Greasers.

Unfortunately, Frankie has a hostile run-in with one of Eddie's closest allies, an up-and-comer named Joe Barbaro who may prove to be a threat.

Frankie gets his hands bloody while disposing of the corpse in the Bay. Horrified by his role in the murder, Frankie goes on a binge and alarms his remaining F.B.I. allies with his incoherent reports. 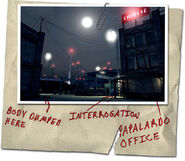 Frankie's influence in the Falcone family wanes, possibly due to Joe Barbaro's dislike of him. Feeling an urgent need to act, Frankie devises a half-baked plan to sow discord among the gangs. He sends anonymous tips to heads of the three families, hinting at schemes and betrayals within the organization. He exposes Eddie Scarpa's excesses and sets up Henry Tomasino for arrest.

Frankie's plan backfires spectacularly: instead of inciting suspicion among the three families, it drives them together. The families arrange a major meeting under the supervision of The Commission, the national Mafia organization with the final say in all disputes. 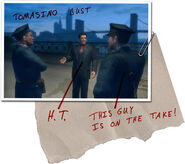 For days, the three families confer with the Commission at Don Vinci's Mona Lisa restaurant. As rumors circulate, Frankie is left on the outside looking in. It becomes clear that the families recognize that they have a rat in the fold. Everyone connected to the crime families comes under scrutiny.

Frankie realizes he has a major problem. Even if his F.B.I. connections remain undiscovered, he fears that Eddie Scarpa will learn that he skimmed some of Falcone's counterfeit cash. He begs his F.B.I. handlers to pull him out of the situation as quickly as possible. However, extracting Frankie is impossible without exposing the unauthorized investigation. Instead, Frankie's handlers devise a dangerous plan. He is supposed to plant a car bomb and take out a major Mafia figure - creating a smokescreen of chaos that will enable his escape.

Frankie's attempt to plant the car bomb in Carlo Falcone's vehicle fails disastrously. He's caught in the act and has to shoot his way out. However, he manages to pin the blame on Berto, a low-level mobster who he guns down at a nearby diner. Frankie successfully convinces Eddie Scarpa that Berto confessed to being the rat. Eddie and the Dons of the three families seem to fall for the story hook, line and sinker. The relieved Frankie celebrates in style, hailed as a hero by the gang. 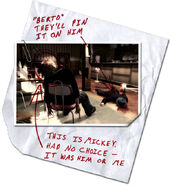 Just when it seems the Frankie has escaped detection, his good luck fails. Eddie Scarpa finds out that Frankie skimmed his delivery of Falcone's counterfeit cash. Frankie desperately tries to escape the situation - but he meets a bloody end. 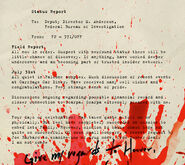 1/47
Community content is available under CC-BY-SA unless otherwise noted.
Advertisement