View source
watch 02:46
The Quarry - The Loop
Do you like this video?
Play Sound

Lincoln Clay Case Files are a pre-release teaser put out by 2K Games containing background information on Lincoln Clay and other Mafia III characters and events.

The case files belong to retired FBI Agent Jonathan Maguire. The files and notes are written in present day (2016).

The file is an audio recording of Lincoln Clay talking about the concept of innocence.

The file is a police blotter dated 16 May 1968 listing four incidents. The note surmises that nearly every crime in New Bordeaux from 1968 onward could be traced back to Lincoln Clay and his war with the Italian mafia.

The file is an audio recording of Lincoln Clay speaking to Cassandra.

The file is an audio recording of Lincoln Clay speaking to Thomas Burke.

The file is an audio recording of Vito Scaletta.

Photo showing Vito Scaletta along with Lincoln Clay at Benny's. The note states that after Vito killed Carlo Falcone, he left Empire Bay and remarks his connections are the only reason he is still alive. He effectively stayed off the police's radar until he joined with Lincoln Clay in 1968.

The image of a burning vehicle with a note detailing the death of Bill Eakin, a reporter for the New Bordeaux Tribune, who had presumably been killed for a hatchet piece he ran on Marcano.

Photo showing union rep Gus Borelli shortly before his disappearance along with Dominick and Geezer Cruzat. The note states that Dominick had direct ties to Tony Derazio, boss of Downtown.

A news clipping dated 24 June 1968 detailing the search for missing union rep Gus Borelli being called off by the New Bordeaux Police Department. The note expresses the author's frustration that nobody listened to his findings back in 1968, and he attributes Borelli's disappearance to Jimmy Cavar, owner of Cavar Construction.

Newspaper clipping from the present day describing a body being found in the concrete foundation of the Pappideaux Building after its demolition. The note states the author hopes that someone will finally listen to him concerning Lincoln Clay and his war with the mafia back in 1968. 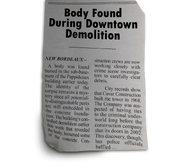 Photo of Baka, leader of the Haitian Mob. The note reads how he was a mastermind at gun running and selling weed in New Bordeaux, and even started to cut into Marcano's profit margins by hitting operations like the Black Lottery. He took advantage of local superstitions and legends like that of Jean St. John, and had the local police and his competition chasing their tails.

Photo of the Perfect Waffle restaurant in Frisco Fields with a picture of an unknown male paper-clipped to it. The note details how the restaurant was a den of mob activity back in 1968 and how the police blew the investigation into Gus Borelli's disappearance.

Photo showing gun running and killings by the Haitians and the note stating that they used voodoo and ghost stories about Jean St. John as a cover when someone went missing. 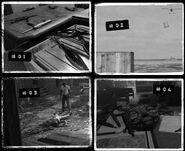 Police report by Detective Jake Boudreaux of a weapons smuggling bust. The note states that the Haitian Mob was making a dent in the Marcano Family's operations by smuggling weapons. 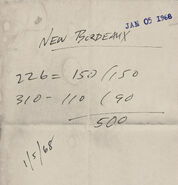 Photo showing Thomas Burke. The note reads how at one point he ran Pointe Verdun, but after a falling out with Sal Marcano in 1966 over a lost shipment he had all his rackets taken away.

Photo showing Sammy's Bar with a note describing how Sammy Robinson ran the Black Mob out of there and how he recruited young black kids off the street to work for him.

FBI report dated 4/16/68 detailing a rash of car thefts in Frisco Fields coinciding with increased activity at chop shops they have under surveillance. The attached note reads that it apparently traced back to an informant named Borelli.

Newspaper clipping of John Donovan after his graduation from Princeton University, along with a redacted combat operations after action report dated May, 1967 detailing Operation Ghost Story. The attached note reads that the newspaper clipping is the only evidence that confirms John Donovan actually existed before he worked for the CIA.

Photo showing union rep Gus Borelli meeting Vito Scaletta after his body is found. The note states that Gus was pitting Sal Marcano and Vito against each other to advance in Sal's criminal organization. It also looks like Gus was playing both sides and was working as an informant before his death.

Photo showing drugs and money from a shipping container at the docks. The note states how the bust seemed suspicious at the time, thinking there was a bigger play involved, possible involving Vito Scaletta. 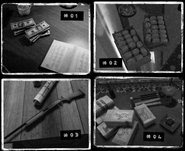 Case file detailing the personal and criminal information of a member of the Marcano Crime Family named Giuseppe Buffa. This guy has connections to the docking districts and local union bosses. 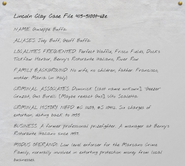 Case file concerning how Agent Maguire was able to connect the dots on his investigation into Lincoln Clay with a photo of union representative Gus Borelli attached.

After action report from December 1966 detailing a classified mission run by CIA agent John Donovan that destroyed an estimated 4000 lbs of opium. Lincoln Clay took part in the operation and it is where he and Donovan first met. Lincoln's actions in this operation earned him the Distinguished Service Cross.